Udupi – a district in the state of Karnataka includes towns of Udupi, Karkala and Kundapura. Udupi is blessed with many religious places, both temples and churches, which make Udupi a favorable center for pilgrimage. 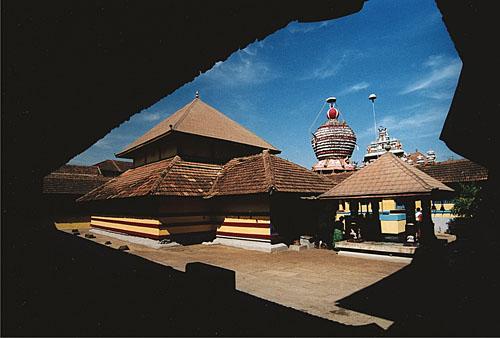 Udupi is believed to have its origin in the Tullu word, Odipu. Another belief is that, it is named after the Moon God. In Sanskrit, Udu means `star’ and Pa means `leader’. The Chandra is the head of the stars; thus the place came to be known as `Udupi.

The legend has that the Moon God was cursed by Daksh Prajaapati. To redeem himself from this curse, Chandra started worshiping Lord Shiva on the banks of a holy pond, Chandra Pushkarini. Pleased with Chandra, Lord Shiva appeared before him and freed him from the curse. Hence, Shiva came to known as Chandramouleshwara after this event and a temple was built to honor Lord Shiva, which was named as the Chandramouleshwara temple.

There is a tradition of offering oil (in a lit array of lamps) to Lord Chandramouleshwara.

Architecture of the Chandramouleshwara Temple

The architecture of this temple dates back to the seventh or eighth century A.D.  The temple has four doors that span across all directions besides two big Shivalingas. The sculpted walls and pillars built of black granite stones make this temple’s architecture a great attraction.

The Temple also has the images of dancing Ganesha as well as Jaalandhra. The stone inscription in the temple dates back to 11th or 12th century. This proves that the temple is built by a highly skilled team of architects, sculptors as well as artists, but there are still no record available giving details on who built it.