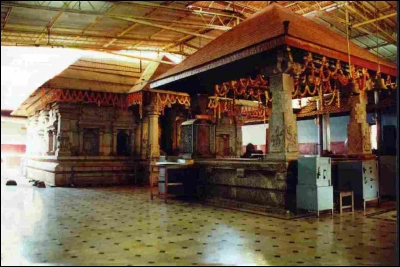 The oldest temple of South Karnataka is the Kadiyali Mahishamardini temple near Udupi. Rich history of temple dates back to about 1200 years ago. It has been confirmed by archaeologists that the temple was established in the 7th century and is an old form of the Lord Krishna temple (the most famous temple in Udupi). The person who discovered the temple was (late) Dr. Guru Raja Bhatt.

The famous statue of Vigraha is present in the temple and it is carved in the famous Badami style of the Chaluykas. The characteristics of idol are as follow-

The statue is a powerful symbolic representation of good prevailing over the evil. It signifies that the demon is helpless in front of the Goddess’s power and she is holding his head in her hand as a sign of victory over him. The expressions of the face is also beautifully drawn. No ornaments are used to make this statue look beautiful but even though it seems majestically attractive. The weapons are also made in such a way that they look absolutely original.

Now, if you are planning to visit the temple then you must have full knowledge of where exactly the temple is located and how far away it is from major cities. To start with, it is only 3 kms from the city of Manipal, 6 kms from Malpe, 30 kms from Kundapur, 60 kms from Manglore and about 110 kms from Dharmasthala. It is a little bit too far from Bangalore; at a distance of about 425 kms. The airport of Mangalore is nearest airport and Udupi's railway station, the nearest railway station to the place. You can very conveniently choose to travel by bus and there are quite a number of frequent buses running directly from Udupi.

The temple has derived its name from the Kadiyali district in south of Kanara. It is a most famous spot all devotees from over the world as it is considered a holy place for Shakti worship or worship for 'power'. Goddess Durga is worshiped in Karnataka as Goddess Shakti. Temples of Kerala have a specific feature common to all its temples; all the temples are mostly made up of medium sized stones with slanting roofs. It is believed that this unique way of carving and architecture has been adopted from the10th century.

'Mahishamardini' is an agitated form of Goddess Durga when she decides to kill 'Mahisasur' the evil spirit who had been creating nuisance in the lives of Gods and finally kills him by cutting off his throat. The design of statue is old and antique. Experts say it was found in the 6th century A.D. Work on idol is done with black smooth stones. The height of statue is two feet. Lotus, lion skin clothes are few features of statue which date back as found in the 8th century.

Attractions at the Kadiyali Mahishamardini Temple 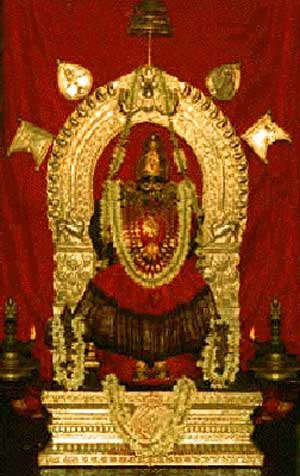 Although it is not the oldest but it is quite a famous temple which people always make a point to visit. The temple signifies the true powers of Shakti. The evening prayer offered to the Goddess Durga is very energetic with devotees chanting and clapping their hands in sheer devotion of the Goddess. People from the whole of Karnataka visit this temple to attend the prayer ceremony of Goddess Durga, especially the evening prayer. The temple doors and the statue in particular is very well decorated and is timely renovated.

You can purify your soul by offering your humble prayers to Goddess Durga. The charity collected from the temple is used for good work. Various schools and colleges are running smoothly in this village without experiencing financial crunch through the charity fund. There is also proper arrangement for a visitor’s accommodation. People in the village live their life following strict tradition and culture. There is much unity in the people of village representing the true spirit of ‘Incredible India’.

To feel the true power of the temple, you should visit it yourself. Once in the temple premises you will feel an eternal peace.