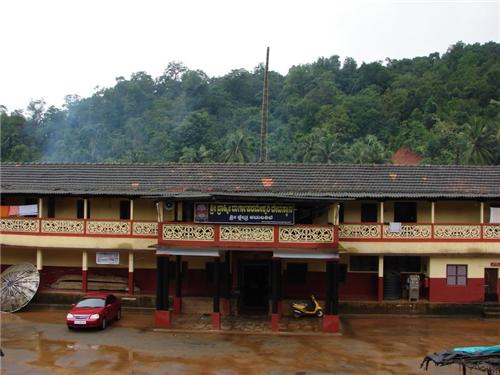 Kamalashile is just about 35 kms from Kundapura in Udupi district. It is surrounded by high mountains and luscious evergreen forests. The river kubja flowing along its sides completes the picturesque view. The most famous attraction of Kamalashile is the ancient Sri Brahmi Durgaparameshwari temple. It is located right at the centre of the village. Kamalashile is named after a stone Linga and has an interesting story associated with it. It is Goddess Sri Brahmi Durga Durgaparameshwari who is worshipped in the form of Linga. The Linga is also known to be a combination and convergence of two eternal powers of Goddesses Mahakali and Maha Lakshmi.

History of the Kamalashile Village

It is believed that beautiful lady named as Pingala who was known to be a dancer of the court performed her excellent dance in front of Lord Shiva and Goddess Parvathi up upon the Kailash Mountain. But one day when asked to dance again, she refused, this made Goddess Parvathi very angry and she cursed her that she would lose all her beauty and become an ugly woman; such ugly as women in the Bhu-loka.

She realized her mistake and pleaded to Goddess Paravathi to show some mercy. The Goddess told her that she was going to come down to the Bhu-Loka to end Khararatasura and all the evil deeds he had been doing. She mentioned that she will be showing up in the form of Linga in the Sahyadri forest. The Linga could easily be identified because it would be in the form of Kamalashile.

Goddess Parvathi suggested Kubja to be near Suparshwa cave and chant mantras till she decides to forgive her and grant her moksha. She did as per Goddess order and later goddess was pleased. The Goddedd is said to have appeared in front of her in the form of Kamalashile (linga). The spot chosen by the Goddess was at the place where the two rivers river Kubja and Naga Theertha met in front of Raikwa Rushi ashram.

The Goddess also directed Kubja to go to Mathura; the holy land of Lord Krishna and get his golden touch after which she would be relieved from her curse and become beautiful again.  The Goddess also told her to name the river of Sahya forest after herself; Kubja. The river will follow the course of flowing towards western coast and flood the land every year as a significance of cleaning the Linga.

How to Reach Kamalashile Village

This is temple is one among the best temples you should visit. Many special poojas are perform=med at the temple and it is said that by taking part in these poojas you can get Mokhsa. Every evening, devotees perform a special pooja known as the ‘Salaam Pooja’. The pooja is a mainly a tribute the great ruler Hyder Ali and his son Tipu Sultan. The Mujarai Department of Government of Karnataka has the Sri Brahmi Durga Parameshwari Temple under its jurisdiction and is quite well managed with them.