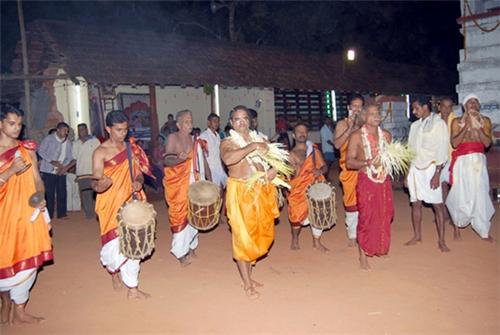 Udupi, is famously known as the temple town for its rich heritage and is know for many Jatres or Nelas. One of the most remarkable Jatre is Siri Jatre.

The whole festival surrounds around a myth dating back to 16th century. These famous stories are sung through Tulu Paddanas which are their folk songs and it has known to bring peace to many.

When does it happen?

If you happen to visit the town in between months of February and May you can experience a great spiritual phenomenon- Siri Jathre or Siriaayana. On a full moon day Tulu people organize this ritual ever year.

It attracts around 10,000 people from across the world. Apart from the firm believers, the people who study the tribal rituals and cults, people who study history or folklore and some people who just want to enjoy the flowery procession and Tulu folk songs also flock to the festival.

Where to attend the Siri Jathre festival

Siri Jathre festival is held annually in these places:


Highlights of the festival

This trance ritual has attracted many scholars at both national and international levels. It can also be called a bulk spirit investigation. Many have said that it’s a unique way of relieving females who are not able to express their long hurt feelings.

Witnessing the rituals will give you an inner strength.