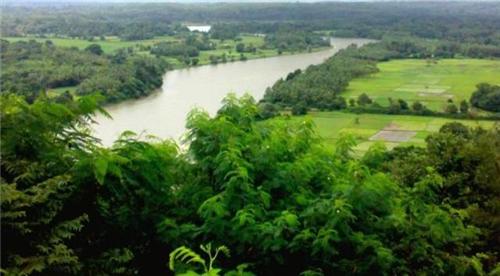 Amongst the major west flowing rivers of country flowing through Udupi, the Swarna river is the most famous one and holds a special significance for the land of Udupi.

Swarna is one of the important west-flowing rivers in the of Karnataka. It takes birth in foothills of Western Ghats and is mainly a rain fed river. One can see it swell to its fullest in months of June and September.

It has been traversing its path fulfilling the water needs of the villages of Perdoor, Hiriyadka, Parika, Herga, Manipal, Perampalli, Uppoor and Kallianpur from the past four decades. The river has two dams built over it, one at Hiriyadka and one at Shiroor. The third dam is also on the prospect to prevent near drought situations when the Swarna dries up or there is lesser rainfall in the region.

During its initial phases the river is known as Yennehole, as its moves further and meet Kaud Hole; one of its tributaries, it finally becomes Swarna River and then joins the great Arabian Sea near Kameshwara village in Udupi Taluk.

In places like Karkala and Manipal, river swarna is at its fullest strength and flow. One can find the calm and serene River Swarna flowing in between paddy fields in between the thick plantations of coconut in between forests. River Swarna gives a different meaning to famous end point of Manipal. People come to enjoy the sunset and sunrise in the river from this endpoint.

At just 10kms from Malpe in Udupi there is the Estuary of Kodi Bengre Beach where River Swarna meets the Arabian Sea. Kemmannu, a small North West village of Udupi is home to four pristine beaches, the Bengre, Gujjerbettu and Kadke. It is a place of tranquility and unmatched beauty. Another one is nestled on the ridge line of river Swarna peninsula and is known as Kemmannu beach. Where else you can find land sandwiched between sea and river occupied by huge coconut farms.

For people who are nowadays literally living in their office cabins pertaining to long hours and for those who are bored of seeing huge concrete structures around themselves; nature welcomes them to Kemmannu. These days’ people don’t get to see rivers easily but at Kemmannu they not only can watch sea they get to choose in between sea and river. Swarna River here offers a quiet canoe exploration off its islands or Kudrus.

All known civilizations have developed on the bank of some river. Swarna River is no different; it is the lifeline of Udupi. Provides facilities in the form of drinking water, agricultural needs and is a great economy booster. There are many picturesque and beautiful spots which attracts tourists from different corners of the world.