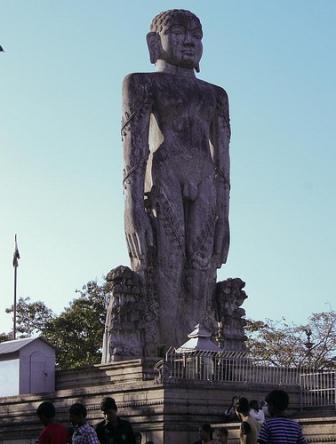 Venoor is a tiny village located on the banks of the Phalguni River. The river flows in the Southern region of Karnataka in Kanara. In earlier times it was a place famous amongst the followers of Jainism as it was the then capital of the Ajila Dynasty. It falls on the Dharmasthala-Moodabidri-Karkala route and comes under the Belthangady Taluq district.

Venoor was once known to be a famous seat of Jainism. It was also the capital of the Ajila Dynasty. The dynasty is renowned for its legacy of powerful kings and one of the most famous being Thimmanna Ajila who is said to have built the Gomateshwara in 1604 A.D. Apart from being a royal blood, he is also believed to be a proud descendant of the Chamundaraya.

Chamundaraya is known in the history to be the one who built the statue of Gomateshwara in Shravanabelagola. There are all together three Gomateshwara statues in the entire Karnatakan region. The one at Venoor is believed to be the shortest amongst all the three. The Ajila Dynasty reign lasted till 1786 A.D. According to history the statue was sculpted by the famous Amarashilpi Jakanachari and faces the west.

There are many other temples in Venoor which are worth the visit like the Mahalingeshwara temple, Ayyappa Swami temple and seven other Jain Basadis.

The name Venoor was given by Veera Thimmappa Ajila who built the monolithic statue of Gomateshwara in the village. Venoor is one amongst the many popular Jain centres in Karnataka. It is known for its religious significance and attracts numerous tourists from all over the country. The colossal statue of lord Gomateshwara stands proudly on a high-rise platform overlooking the Phalguni River, with its face towards the west.

Venoor holds huge importance for the Jains. This place provides an insight to the history of Jains. The village is a historically significant spot. Jain temples are known as Basadis. They have many shrines inside them and the 35 feet long Gomateshwara is located in the Basadi at Venoor. Basadi are of marvelous beauty. Their architecture is splendid and exudes great style. They are well-maintained throughout the state and attract numerous tourists.

By Bus
There are regularly running direct buses from major cities to Venoor. You can take your pick.